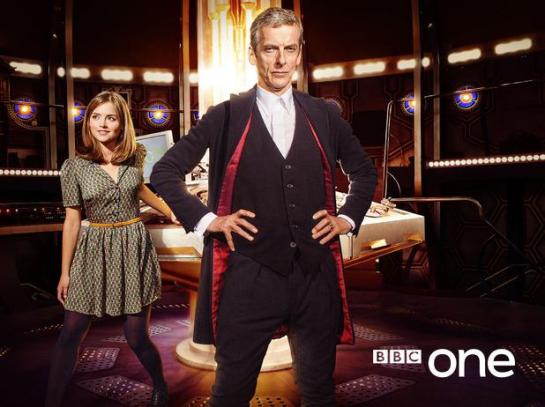 Oh hi! It’s been a while. Let’s get straight into it shall we? As mentioned in the past, I am firmly not a fan of the direction in which Steven Moffat has taken Doctor Who. I was hoping the Capaldi era would signal a new lease of life, but Saturday’s episode confirmed that Moffat is still up to his old tricks. I think going over everything that annoys me about the programme would just be regurgitating most of what a lot of other people have said. Instead, I give you my own interpretation of Moffat’s scripts, which I think pretty much sums up my feelings on the subject. This will definitely make more sense if you’ve seen the whole of Saturday’s episode.

DOCTOR: I can solve any problem! I’m the master of any sticky situation! I’m Scottish! I’m Steven Moffat! Ahem – sorry – I mean I’m the Doctor!

DOCTOR: That’s not a dinosaur. It’s a FEMALE dinosaur. I must mention this so that I can have a protracted one-sided conversation about how I’m not flirting with it! Joke for the adults!

DINOSAUR: Do I get a say in this?

DOCTOR: No. You’re female, so better just stick to the feisty wisecracks.

SHERLOCK: I’m investigating the origin of this dinosaur and how he came to end up in the Thames.

JENNY: It’s not a he. It’s a female dinosaur!

SHERLOCK: In that case I must act adorably disarmed in the presence of this powerful female. Women love that.

VASTRA: Guys, we’ve just spent the last minute saying absolutely nothing in an awful lot of words. If we stopped doing this, the episodes could be over within an hour, like they used to be, and we wouldn’t have to engineer all this horribly forced sexual tension.

SHERLOCK: Over in an hour? Pathetic.

JENNY: At least we managed to get in a bit of innuendo. Wink wink.

VASTRA: No, but seriously. Is there any kind of plot here?

WATSON: It’s kind of like a storyline. We used to have them.

DOCTOR: I don’t need a plot. I’m the Doctor. I AM the plot. I’ll just say a load of words in some kind of order whilst looking powerful and mysterious and perhaps a little tortured and then we can move the episode along. How does that sound?

CLARA: Go on then, Doctor!

DOCTOR: (LOOKING POWERFUL, MYSTERIOUS AND  A LITTLE TORTURED) I’m the Doctor! I vote we all move locations in order to give the pretence of some kind of plot! Because I’m the Doctor! Yes to independence!

JENNY: No, River, you’re not in this any more…

RIVER SONG: How do you know I’m not? I might be. But I can’t tell you. Y’know… spoilers…

DOCTOR: River! My soul is tortured by the mere sight of you – even though no one can quite remember why, because you tend to just pop up at random intervals to wink at me and shoot things.

CLARA: Why did you shoot the dinosaur?!

RIVER SONG: It was a girl dinosaur? Rats. If I’d known that I would have flirted with it because sexual orientation is fluid and we’re a really progressive show.

CLARA: I never said you w-

DOCTOR: Stop flirting with me.

FANGIRL: Hey guys! Sorry, I heard the word spoilers! If you want to know any spoilers, I’ve watched a couple of leaked episodes online and I follow, like, 157 Doctor Who Tumblrs! (TO DOCTOR) Apparently you’re now old because you’re played by a slightly older actor! And he’s Scottish.

DOCTOR: AYE. DOWN WITH THE ENGLISH.

CLARA: Hold on a second. We can’t have fangirls wandering into scenes. It’s a bit self-referential. I mean seriously, how’s that going to look?

DOCTOR: Ha! You’re totally jealous of this other female presence, Clara! Look, I told you, I’m not your boyfriend. I’m too old. Look at my lines and my grey hair. I’m practically dead.

CLARA: I know. You’re ancient. I’m so conflicted. I can’t cope with you being old. I’m going to leave.

MATT SMITH: Woah – who’s that grandad over there?!

MATT SMITH: Wow. I got old.

MATT SMITH: Listen, Clara. I know you kind of want to leave because you’re fed up of being squeezed into a skirt that’s just a little bit too tight and making feisty wisecracks all day long, but seriously, it’s better if you stay. We need you for the male fans, and as a dubious role model for young girls, whose agency can be analysed endlessly on online forums.

CLARA: Urgh. Ok. (TO DOCTOR) But you’re not my boyfriend, remember that. You’re too old now.

DOCTOR: Totally fine with that.

That’s it then. Sherlock has gone as quickly as it came. Quicker, maybe – it got off to a bit of a shaky start. But this third and final instalment of series 3 was right back on form. The much sought-after ‘actual plot’ that many lamented the absence of in previous episodes finally materialised. And there was a fabulous cliff-hanger to boot.

We finally got to meet the man belonging to the pair of icy blue eyes that stared out at us on New Year’s Day as Watson sautéed on the bonfire: Charles Augustus Magnusson (a thrillingly evil Lars Mikkelsen), sole retainer of a gigantic amount of incriminating information on everyone he’d ever come across, and also a massive creep. When he wasn’t licking people’s faces, he was busy blackmailing the entire country. But not for much longer. Enter Sherlock.

A slightly squalid Sherlock, actually, hiding out in a drug den – supposedly for a case. ‘Stay out of my bedroom!’ he ordered once he’d been dragged home and scolded by everyone (not to mention slapped a few times by the wonderful Molly, who hasn’t had nearly enough to do this series). Sherlock was clean, it turned out. So what was he hiding in the bedroom? Only the flirty Irish bridesmaid from last week! Watson’s incredulous response to this ‘relationship’ was priceless – Martin Freeman is the king of reaction shots. But Sherlock had morphine pumping through his veins soon enough, this time in hospital: he’d been shot. The culprit? None other than Mrs Watson.

Oh, Mary! What a dark horse, stringing us along in your jovial manner! We saw the word ‘liar’ on the screen alongside ‘bakes own bread’ when Sherlock first met Mary, but we chose to ignore it because she was just so nice. Yet suddenly here she was, putting a bullet through him. It was a clever twist, and credit to Amanda Abbington for making us invest so much in her character in just a few episodes that the big reveal, when it came, was a genuine shock.

A series of confrontations followed, amusingly interspersed with Christmas at the Cumberbatches (with Benedict’s parents reprising their roles as Mr and Mrs Holmes). It was thrilling, but perhaps not to the extent of previous finales. Two years ago, Sherlock was the sharpest thing on TV. This year it knew it, and veered dangerously towards self-indulgence a few too many times. But you can’t fault its intelligence. There were lines in this episode that wouldn’t have been out of place in a sitcom, but as always they were woven around a much darker story – in this case one that played to very current fears of surveillance and exposure. Beneath all the panache, Sherlock remains a beautifully crafted drama.

After a final rendezvous with Magnusson (in what appeared to be the Tellytubby house crossed with Kew Gardens), Sherlock was on a jet headed for certain death in Eastern Europe. Not again. But oh, how they toy with us! Just as the credits began to roll, a voice piped up: ‘Did you miss me?’ And there he was in all his mad glory: Jim Moriarty. As quickly as it had taken off, Sherlock’s jet was landing. Yes, Moriarty! We did miss you! Come back and engineer some real crimes! Blackmail and face-licking are one thing, but not a patch on the havoc you used to cause! Let’s just hope your mayhem isn’t another two years in the making.

It was the question on everyone’s lips: why did Watson feel the need to grow that moustache? Oh and also, how did Sherlock manage the whole roof-jumping, death-faking thing in the second series finale two years ago? The Empty Hearse – the long-awaited and much-hyped opener to series three – promised to reveal all. And for the most part it did. But did it match the brilliance we became used to in the first couple of series? That’s up for debate.

At the beginning of the episode, Sherlock is ‘dead’. Watson is grieving, but also preparing to propose to his new(ish) girlfriend. Mrs Hudson is angry at his lack of contact, thrilled by the news of his upcoming nuptials, and once again surprised by his sexual orientation. Anderson has apparently turned into one of those people who make YouTube videos about how Sherlock threw himself off a building without dying. (All very meta, I know).

Ah yes, the roof-jumping. Finally, we were going to find out what actually occurred behind that lorry full of bin bags. But not, it seemed, until we’d sat through a couple of red herrings. It’s a shame that they were red herrings, because I quite enjoyed the plan that hinged on Derren Brown hypnotising an already-concussed Watson. In the end, though, Sherlock survived with a giant blue bouncy castle, a dead ringer (literally) and a couple of dozen homeless people. That’s what Sherlock tells a slightly deranged Anderson, anyway. As for the moustache? Still a mystery.

Back to the present, and Sherlock is being tortured in Serbia, until Mycroft casually steps in and summons his brother back to London. The reason is an imminent terrorist attack on the capital. But that can wait. First, we need a few emotional reunions. Except that Sherlock doesn’t do emotional. He prefers dressing up as a French waiter and crashing a marriage proposal: much more dramatic. As always, it was Sherlock’s endearing lack of social and emotional tact that made for the most entertaining moments of this episode. Where plot was concerned, though, it fell short.

The trouble was that this episode felt aimed towards diehard Sherlock fans, and less towards people who just like watching good TV. Time was spent poking fun at fangirls when it should have been used to move the story along. As a result, the Guy Fawkes-inspired plot to blow up Westminster using the Underground felt rushed and was resolved all too quickly and simply. I’m now wondering how many films and series of Homeland could have ended sooner with the knowledge that bombs have ‘off’ switches. Overall though, it was an enjoyable episode, with the usual razor-sharp script and top-notch acting we’ve come to expect. Now that Sherlock is firmly installed back in Baker Street, the upcoming episodes will hopefully be back to usual form.

Just one more niggle: I could have done without the edgy shots of the Underground. The Tube is not that cool. And it’s never that empty.